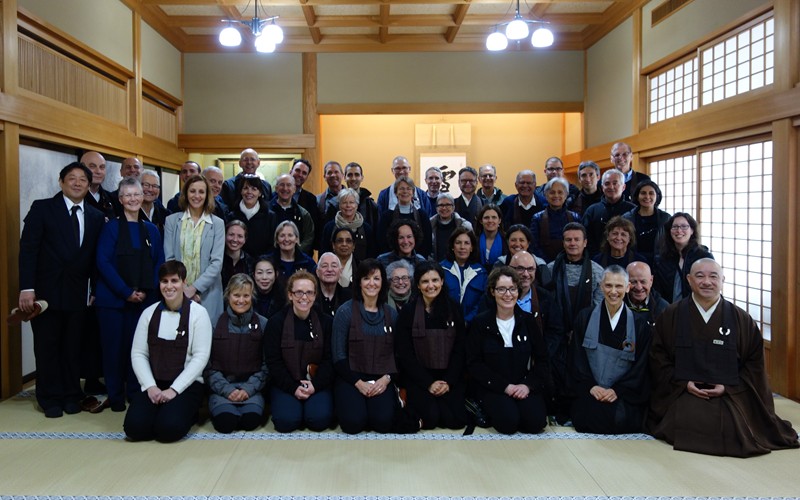 Pilgrimage has been part of Buddhist tradition since the time of the Buddha. Roshi Kapleau spent many months on pilgrimage, traveling throughout Southeast Asia, before settling in Japan to begin his Zen training in the early 1950's.

Twenty years later, he took small groups of students on pilgrimage to Japan and China and urged his senior students to make visiting those countries a priority in their training.

Over the years at our Centers in Vermont, Toronto, and Costa Rica, pilgrimage has become an important adjunct to our Zen training. Members have made four pilgrimages to Japan and China. The pilgrimages are not sight-seeing trips, but are undertaken in the spirit of Zen training. There is daily zazen, and offering of incense, prostrations, and chanting services at each of the temples and monasteries we visit.

On the first Triple Sangha pilgrimage 27 members of the Vermont, Toronto, and Casa Zen (Costa Rica) Sanghas traveled to Japan with Sudarshana Kapleau, Roshi Philip Kapleau’s daughter. Sudarshana acted as our guide and interpreter for the two weeks we were in Kyoto, Nara, Obama, and Kamakura.

Our base was the Kyoto Traveler’s Inn, a small business hotel near the Gion district of Kyoto. Most mornings we rose early and walked to the nearby temple of Nanzenji to do zazen together. We worked in the garden raking leaves, then sat in the large meeting hall, followed by a short Rinzai chanting service. Itinerary

The second Triple Sangha pilgrimage was in honor of Roshi Philip Kapleau, who had trained in Japan for 13 years. Roshi Kapleau died on May 6, 2004 at the age of 91, and during this pilgrimage, led by his daughter, Sudarshana, and her husband, Ryutaro Nakamura, we planned to visit temples especially important to him. Forty-three people from four countries participated in the three-week journey, which was centered in Kyoto.

As before, our base was the Kyoto Traveler’s Inn, where we sat each morning in a lovely tatami-floored room at the hotel. Traveling with such a large group in Japan presented certain problems, such as finding restaurants large enough to accommodate everyone and finding buses with enough empty space for the group. Nonetheless, with a lot of advance planning, we managed well and the trip went exceptionally smoothly. Itinerary

The next pilgrimage was a three-week trip planned and led by Ksanti and Tenzing Ling, Chinese-Canadian friends in Toronto who are practicing Buddhists. We were blessed to be able to make this remarkable journey which took us to the sites of the Sixth Patriarch, to the temple where Zen Master Dogen trained, to the sacred island of Kuan-yin, to the mountain of Jizo bodhisattva, and many other places. Fourteen people from three countries went on this long journey, the second one within a year.

Our pilgrimage began in Shanghai and traveled south towards Hong Kong. It was an exhausting, exhilarating journey that had a profound impact on everyone and gave us a much broader appreciation for and understanding of our Zen heritage.

Our Fourth Triple Sangha Pilgrimage was led by Andy Ferguson of South Mountain Tours. It was an impeccably planned journey through northeast China, with an emphasis on practice at the temple of Chao-chou (Joshu). We visited the cave where Bodhidharma, the founder of Zen, sat in meditation for nine years, spent time in the Longmen Grottoes, and also went to the Dharma Seat of the Second Ancestor.

Because of the extraordinary itinerary, many Sangha members wanted to go on this trip. Originally, Andy had planned to take no more than 20 people, but he graciously agreed to take all 37 people who asked to come.

Our most recent Triple Sangha Pilgrimage was completed in mid-March of 2016. Fifty people from five countries attended. As before, our base was in Kyoto and we stayed at the Kyoto Traveler’s Inn. We began each morning with zazen in a tatami-floored room at the hotel.

Sudarshana Kapleau-Nakamura (Roshi Philip Kapleau's daughter and a Japanese interpreter) and her husband, Ryutaro Nakamura led the pilgrimage. Due to the size (and average age, it must be said) of our group, we decided to depend heavily on tour bus rentals. Ruytaro did a fantastic job of finding the best bus company for us, and we were treated royally. It was a vast improvement over taking public transportation as we had done in previous trips.

Due to the efficiency of using a bus, we were able to complete everything on our ambitious itinerary, and even added a few temples and stops. 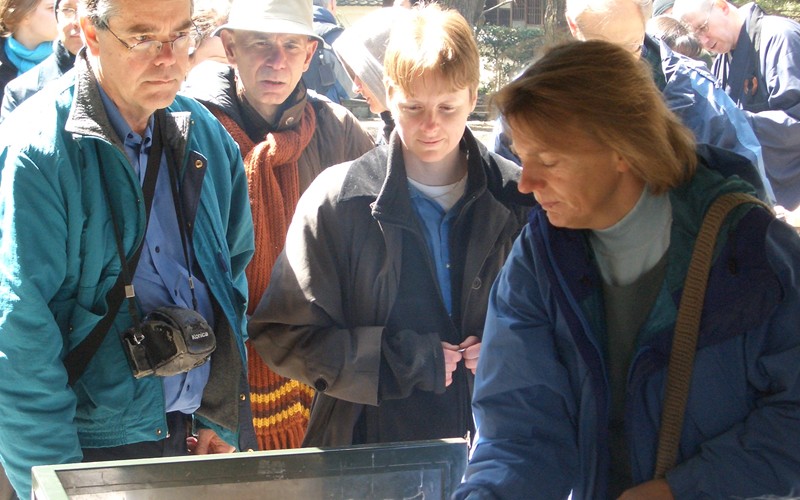 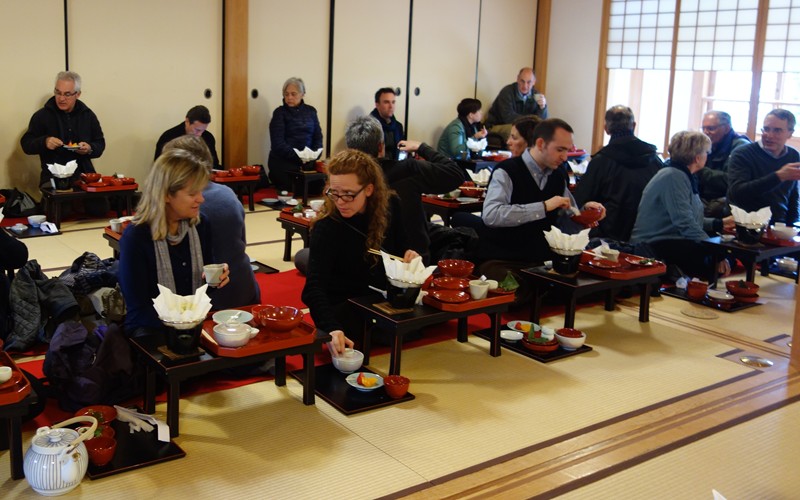 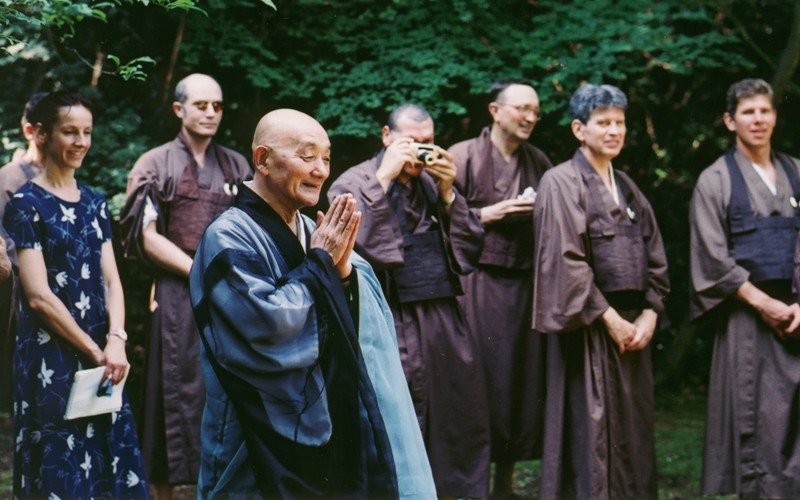 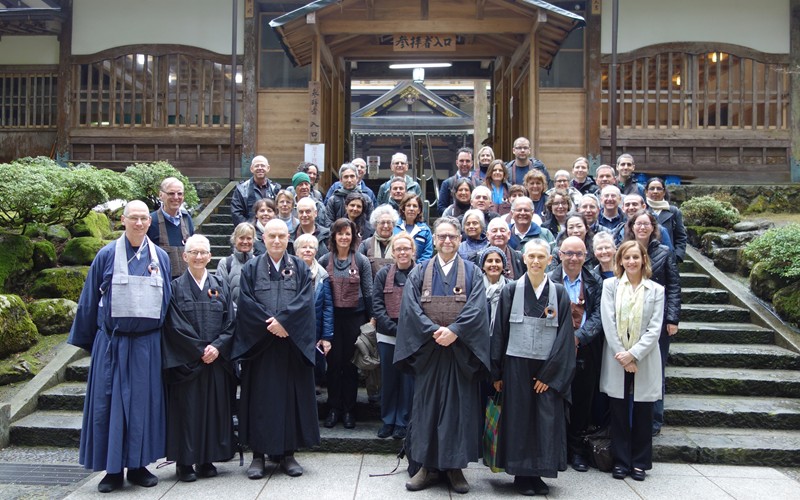 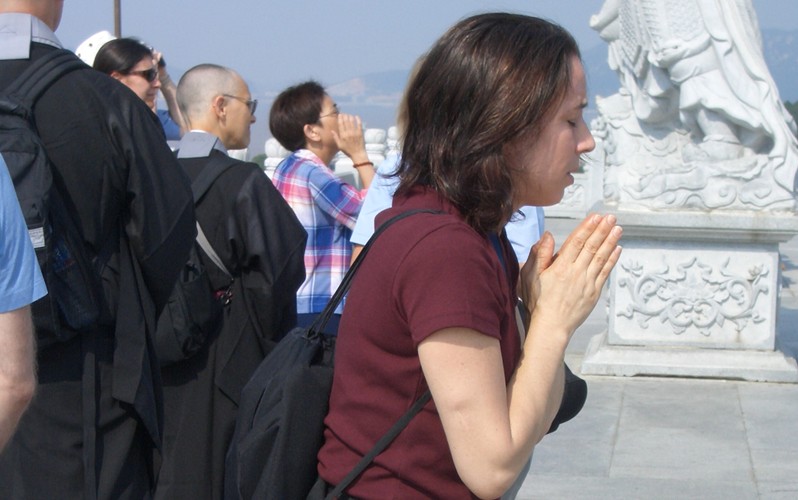 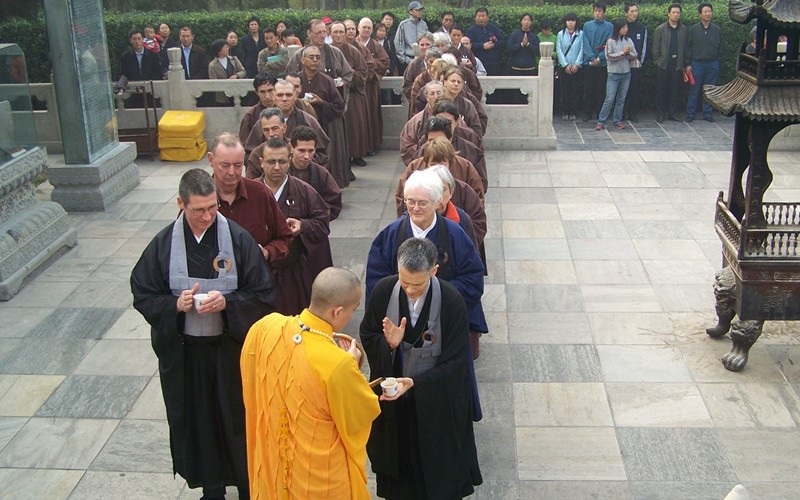 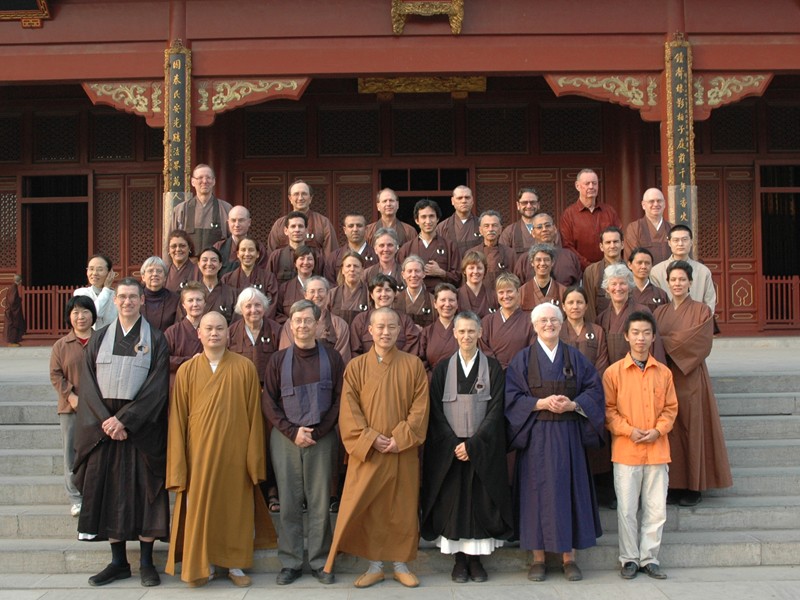 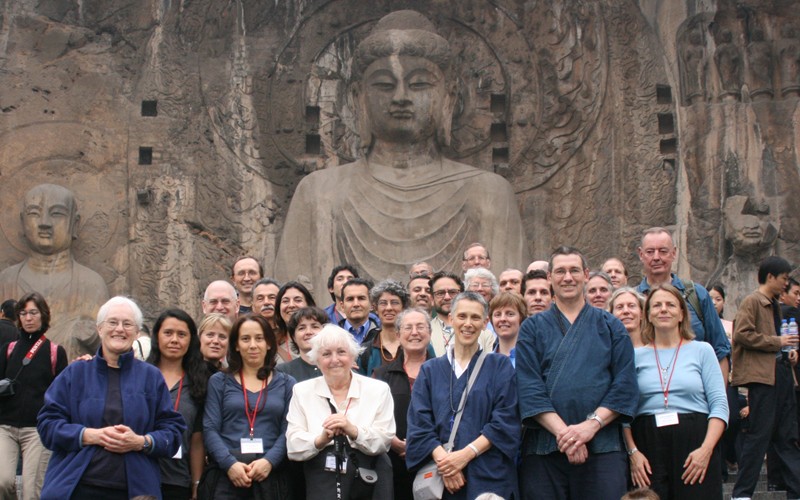